Cultural victims of war by objective of Josef Sudek

More than 150 historical photographies, the sequel of set „Ruined Prague“, is reflecting the outcomes of 2nd world war events. Cultural herritages were affected by bombing and fighting in the streets. Exhibition Josef Sudek: Topography of Ruins is held in House of Photography, Prague City Gallery untill August 19th 2018.

There are 242 items featured in this exhibition. Because of greater impact of picture quality, the photographies are intentionally let without notes. The visitors can find more information about photographies in the information bulletin. The diaries of Josef Sudek are featured too. Original positives created by Josef Sudek´s own hand are borrowed from Museum of Decorative Art in Prague.

40 photographies of other authors are featured with grey frame. They are supposed to add the historical information from archives of army and Prague city. Sudek´s newprints are based on original negatives owned by Institute of Art History. They are featured in white frames, as well the original positives.

Some of photographies from Josef Sudek´s old negatives were created by Vlado Bohdan. He used classical wet technique, despite negatives are digitalized. „I miss very much the opinion of the original author. I cannot ask him about his wishes or how I shloud do it. Sudek knew his way and he was focused on emotion of photo. He often said thing should be done properly and with no worry,“ said Vlado Bohdan during exhibition opening.

First part of exhibition are photographies created during work for 1946 calendar of publisher Václav Poláček.Sudek´s 53 photographies were featured, portraying impact of wartime on cultural herritages.

Photographies were made during several curtumstances. During bombing on Februrary 14 in 1945 was Prague mistaken with Dresden as target because of bad weather. During Prague uprising beteween May 5 and May 9 in 1945 herritages were damaged too. Old Town Square and Wenceslaus Square and the place around radio station were the most affected places by fighting.

The storage room of metal statues and bells in Maniny and Holešovice port are important set too. The metal was transported by ships and it was used for producing weapons. There were also ideological reasons behind destroying. The effort of protecting herritages is documented too. The walls were built around herritages. Because of fire protection, there were built almost 70 water dams in city squares and parks.

The catalougue with expert studies was published. Guided tours, discussions and workshops are planned. The exhibition will be held in several european cities too. 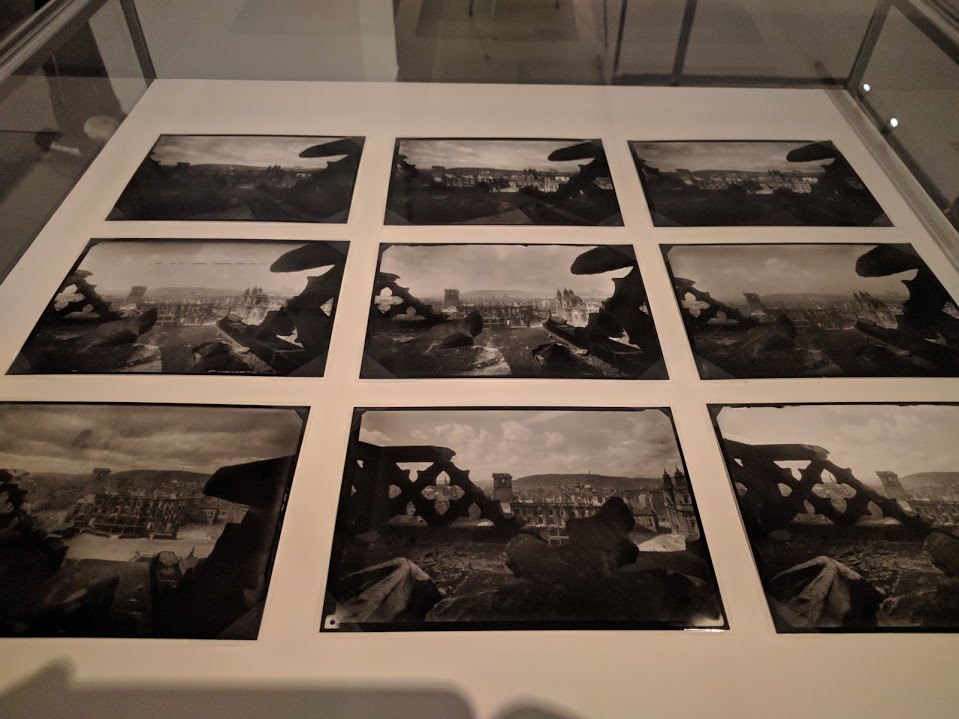