František Kupka and the origin of abstraction 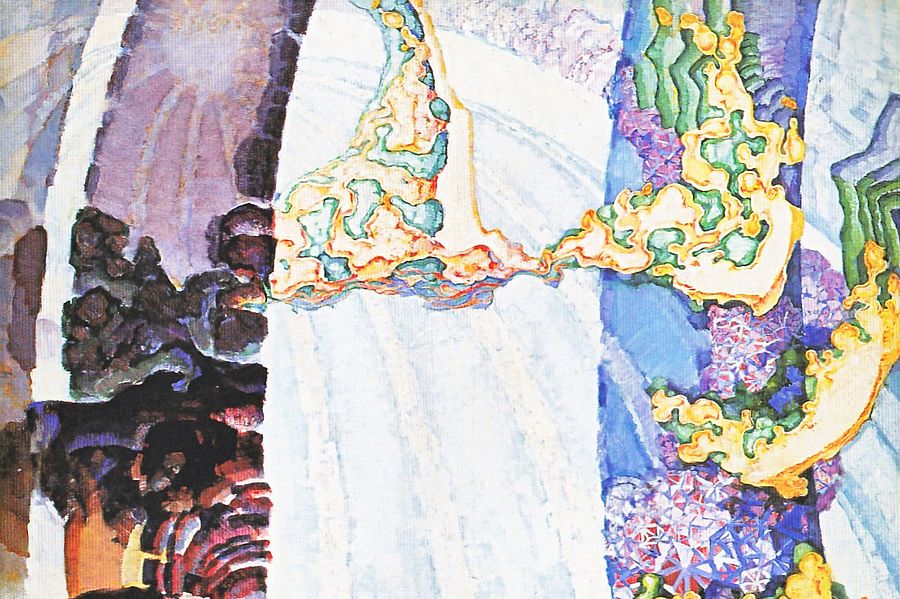 The wide retrospective of painter František Kupka (1871–1957), one of the originators of world abstract art, can be marked as one of most important exhibition projects of this decade in Czechia. Exposition, situated in Waldstein Ridding school in Prague, shows wide selection of Kupka´s artworks, from his early symbolism works of the 1890s, making breakthrough in abstraction in 1910 – 13 and following artworks to his late works of the 1950s. Such wide show of Kupka´s artworks was possible to visit only 50 years ago, during 1967-68´s international travelling exhibition. The exhibition is held till January 20th 2019. 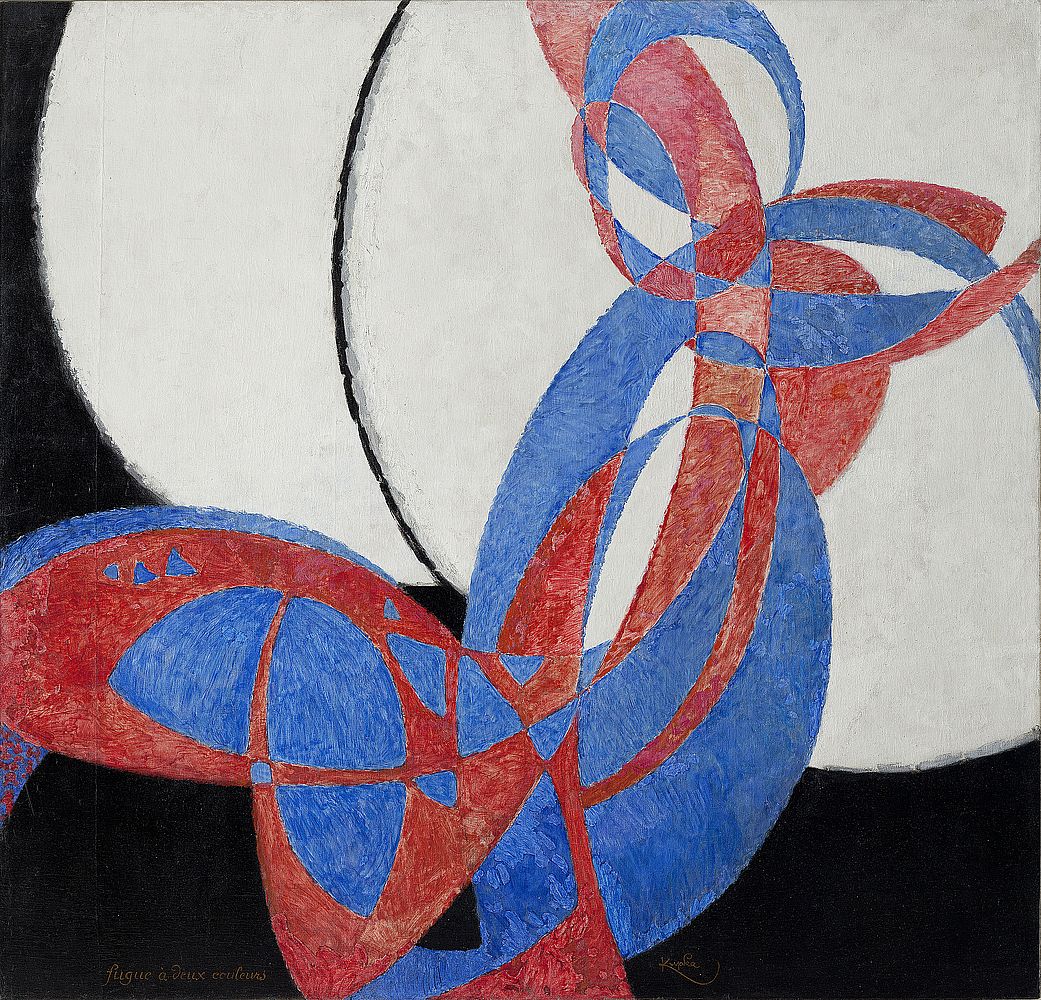 The current exhibition is the result of cooperation of Czech National Gallery and French Musée national d’art moderne – Centre Pompidou. These two institutions own the widest collections of artist´s artwork. There was the exhibition held in Paris as their joint project, and the exhibition got almost 250 thousands of visitors. Except of the artwork owned by organizing institutions, there are showed also selections of artwork owned by important foreign museums, e.c. Guggenheim Museum in New York, The Art Institute of Chicago, Thyssen-Bornemisza Museum in Madrid or Albertina in Vienna, and also by private collectors.

František Kupka made main Impact on world art in years 1910-13, when he created his first full- abstract artworks, and together with Wassily Kandisky and Robert Delaunay made breakthrough in abstraction. During Autumn salon in Paris in 1912 he presented paintings Amorfa. Warm Chromatics and Amorpha. Fugue in Two Colours, especially the second one became the symbol of early abstract art. Kupka´s painting from Vertical plans (1912-13) serial are very valued too. Their orthogonal compositions represent opposite of curved shapes of both Amorphas. 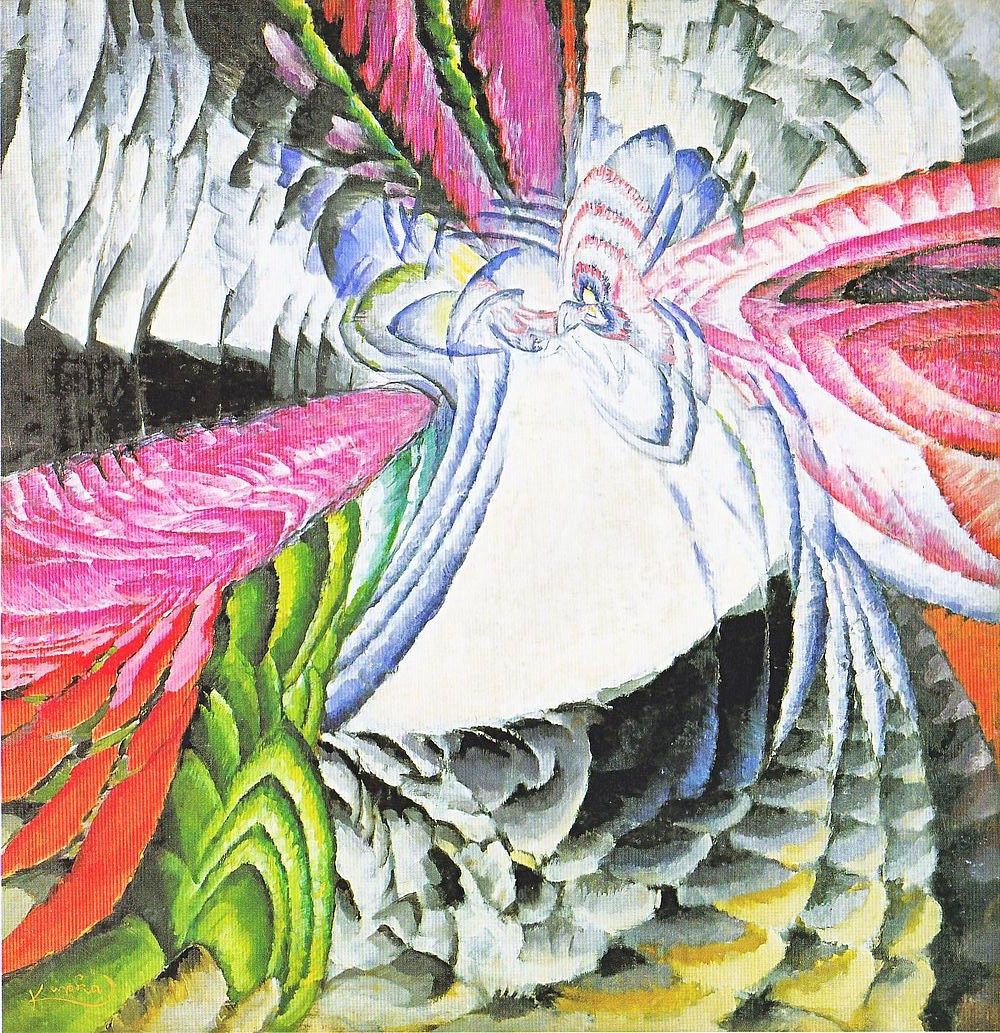 Kupka´s way to abstract art was extremely difficult, the artist took more directions at once and his effort culminated in serial of paintings at time before World War I, when he decided his main themes of his future creations. In next decades, he cultivated single thematical lines and at the same time he was finishing or recreating his early artworks. Therefore deciding the dates for his artwork is sometimes problematic. On the other hand, this fact is the evidence of unique inner coherence of single thematic and time layers of Kupka´s artworks.

Kupka explained in the interview for New York Times in 1913, he is interested in morphological units (shape elements of certain type) and their mutual relations. The connection of opposite elements (e.c. orthogonal and curved elements in one paintings) are considered as destructive by Kupka. Similar rule is applied on colors, they have to be all in major or minor scale. As a parallel to the study of shape forms, Kupka was exploring the isolated impact of colored and light units (paintings from Disks of Newton series) and mutual relations of elementary shapes and spectral colors (Shape of Blue, Shape of Yellow). 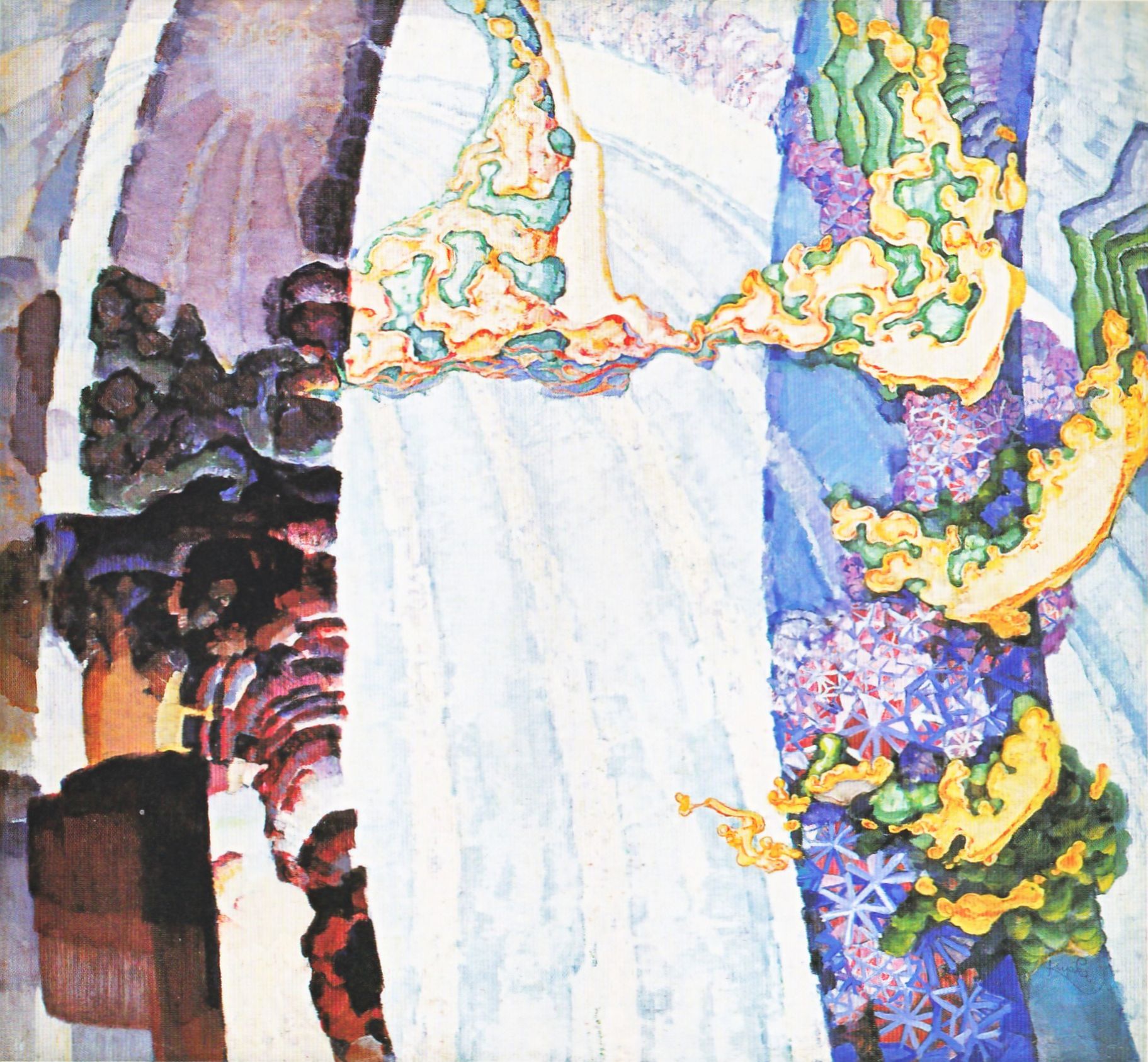 Except of basic postulate of the denial ilusive picturing, Kupka had no fixed axioms in abstract art. Unlike Piet Mondrian and artists of group De Stijl, Kupka did not accepted projection of area as one only possible substitution of classical perspective. He worked with space pictured by alternative methods: several frontal plans, first space and second area plan, izometric perspective (serial Vertical and diagonal plans) and numerous variations of more-point perspective (serial Organization of Graphic Motifs).

Some interpreters of Kupka´s artwork are focused on acknowledgement of geometric line of his abstract artwork, represented by Fugue in Two Colours and Vertical plans. This view is one-sided, because there is importance of Kupka´s organic abstraction, which is the opposite to his geometrical creations like alternative space perspective to area picturing. Therefore it is important, that organic abstraction (referred as created motiffs by author himself) is represented on the exhibition by painting Creating, two variations of spectacular cosmic visions Cosmic spring, one variation of Story about pistils and stamens and other artwork. 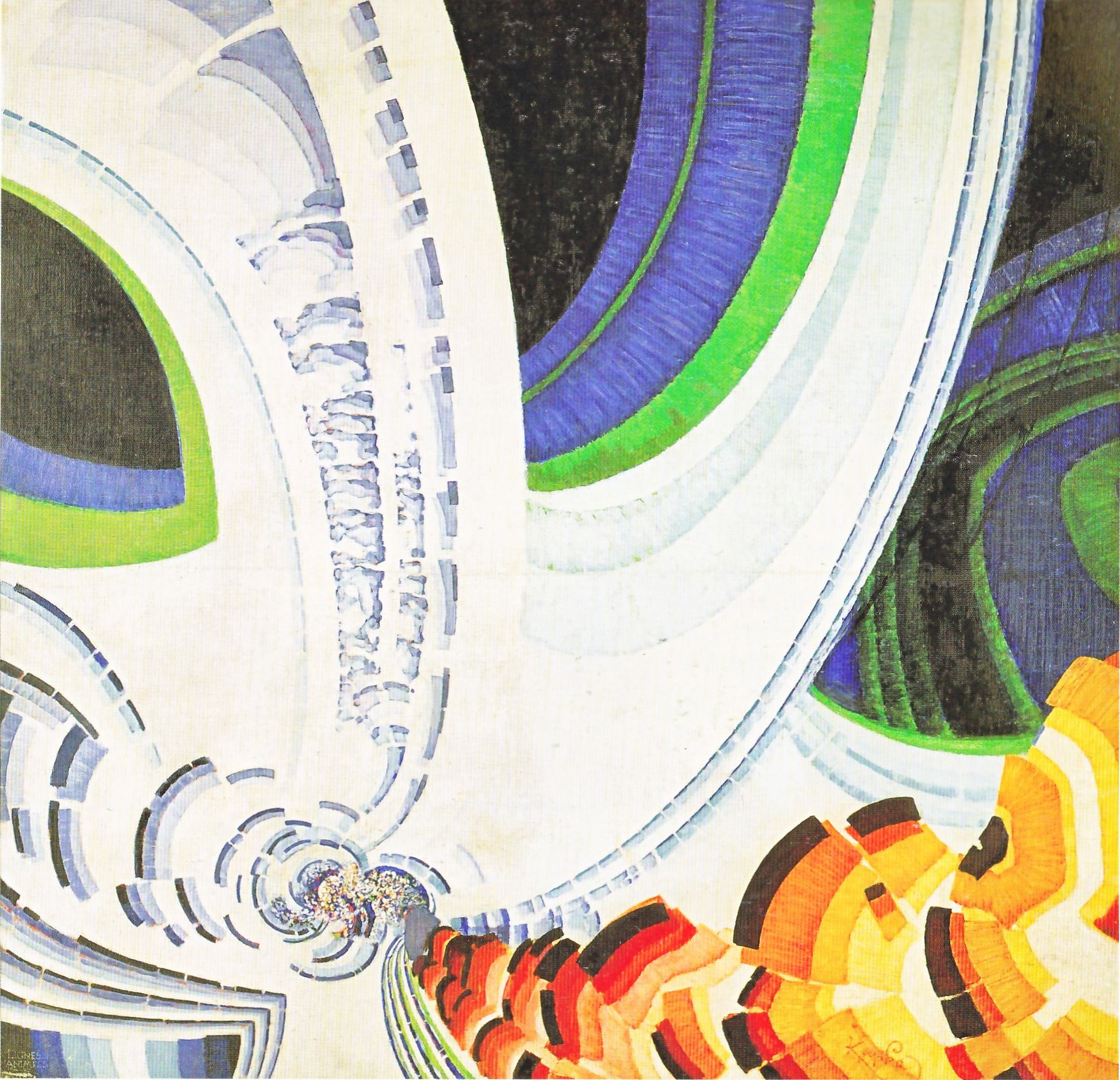 Speaking of this group of paintings, it is necessary to mention self-similar shape elements which are present in Kupka´s artwork. This scale invariant units, which are subject of fractal geometry, are indentified in wide selection of nature phenomenon nowadays, from anatomical structure of plants and animals, geological reliefs of landscape and the shape of clouds to organization of galaxies in space. Very interesting fact is, Kupka died long time before formulation of fractal theory. The knowledge of self-similar shapes was not found thanks to study of then nature science by Kupka, but only thanks to focused observation of nature and his own intuition.

However the truth is, Kupka´s way of thinking about essential modern art was inspired by the then findings of astronomy, biology, physiology and other science. The results of his thinking about shape elements, colours, light, space, movements, expressions and other basic questions were summarized in book called Creation in the Plastic Art, which was finished in 1920. The original French manuscript was never published, only its Czech translation was published in 1923. Therefore the impact of this book was minimal in comparison with Kadinsky theoretical texts. 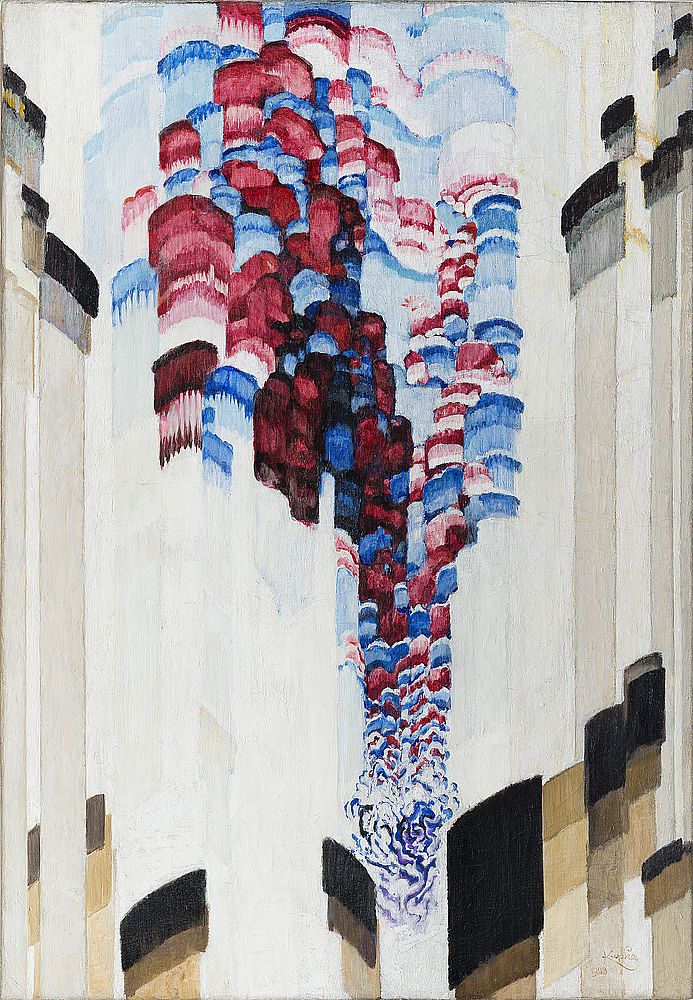 The introspection in formal logic of Kupka´s artwork is showed by the selection of abstract woodcuts Four Stories of white and black (1926), which is systemization of compositional schemas organized in four thematic series. The Shapes of Life series represents organic forms, Triangles series represents crystalline mineral forms, Curved Lines in Space represents cosmological abstractions and Vertical and diagonal plans represent ideal space. There is compositional schemas of three important paintings In the third series of graphics: Cosmic Spring, Lignes Animées and Moving Blues.

However, this organization of artwork into four formal – thematic series, which was proposed by Kupka himself, is significant simplification. Various themes did not developed isolated in his artwork, but they were meeting and resonating in concrete artwork. Good example is painting Upward Thrust II (Vortex). Its basic compositional scheme is based on isometric perspective of crossing diagonal plans, the detail rendition evokes vision of spectacular cathedral architecture like other artwork of this series. Accented detail at the bottom edge is clear connection of painting with organic abstraction series.

Kupka´s turning point to abstraction is sometimes explained in the way, that artist decided to create virtual dematerialized world only by painting means, and this world has no connection with nature. In his theoretical essays are really sentences which may lead to such misinterpretation. His systematic observing of nature, nature science studies and organic line of his abstract artwork give evidence, that his real goal was to know and express hidden dynamics of inner forces, which gave form to outer shape of world in many variations.

One hundred years later, it can be stated that origin of abstraction before World War I was not the end of object art. Heroic efforts of František Kupka and the other protagonists of abstract art was motivated by desire for going under the surface of sense perception and knowing essential connections in real world. The goal was not the denial of nature, but understanding of the most general principes logic, which shaped all visible forms and ruled to all in microcosmos analogically like in macrocosmos. František Kupka said: „Examples of organic connections in nature are available to all painters and sculptors, let´s wish them to create so logically as nature itself.“