The center of Prague become an immitation for turists, urban outdoor museum

The main theme of Prague Bienale Project 2018 is tourism and its effect on the city people's life. It is not good for Prague.”People who live in the city centre notice bad effects on the attractive parts of the city. That´s why we pointed this phenomenon. It is global problem, the tourist most exposed cities are losing its identities and they are more and more similar to each other, said curator Elis Unique about exhibition Urban Skanzen. 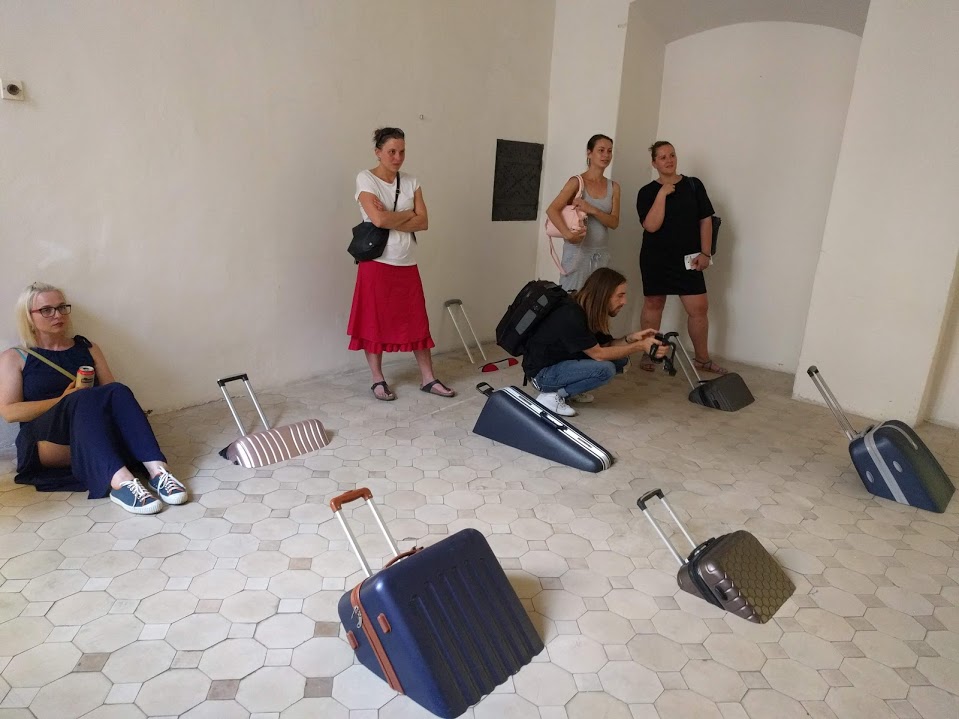 Students of intermedia atelier FAVU focused their work on homogenization and simplifying terms. Collective art was created during their travels in Israel and Palestina. Every student of year 2016-17 received one word which could reflect local political conflict. They were expected to find their own personal definition of this word, while they were gaining visual material. Then, in the group of two, they connected the words to get new meanings and filmed more material. The central video comes from solar power station in the desert, where are used mirrors to connect sunrays into one flow. “At the end of the process, we found central word “lipstick”, which – in some psychedelic way – might embrace all previous words,” said Pavel Sterec, the chief of atelier. The installation is realized on 30 monitors in the exhibition, and there is a plan to create website for it.

The work of artist Daniela Baráčková is reflecting Plumov chateau. She wants to point out ambitious project of 17th century, of which only one quarter was realized. The part of installation is also broken banister as symbol of non-availability for visitors. The environment of city is reflected in presence of stikers, which are typical for city streets.

Another artist came with his own life story – he was born in Prague District 1 and left this place. Jan Pfeiffer showed the story of original inhabitants of Clam-Gallas Palace on the example of his family. “As showed in movie, the leave of beautiful place was forced against their will,“ points out Elis Unique. The series of drawings, which portrays exit routed from building, is additional part of work. “How fast is the change of place without us? Facade, boards, stairs remain the same. Maybe they are painted newly. The left place remains free. Every place has its unique continuity. Human bodies are leaving, new ones are coming. We change, we leave, we forsake,” it is said in movie.

I worked with the idea of inclined plane during the planning of the exhibition. I went to Clam-Gallas Palace through the Old Town, which I have been avoiding for 15 years. The number of tourists was surprise for me and the coffer is typical for tourists. Lots of people are passing through, heading to their destination, but it disappears. It is a metaphor of tourism: they are heading for real experience, but in fact they are participating on disappearing of the real city, “ describes his installation David Možný. The name of his work “Heat Wave” reflects term for anomaly in weather. Very high temperatures for certain period of time may cause e.c. to higher suicidal behavior of people, higher energy consumption, aggression. It is situation out of our control and slightly catastrophical one, the state of danger are announced,“ adds David Možný.

Another of his work is called Borderline. It originated from the cover photography of the book about German Democratic Republic. It is the idyllic picture of people in front of Branibor gate in eastern part of Berlin. This picture was made up and additionally retouched. In fact, there were soldiers in that place and the border was strictly protected.

Englishman Daniel Tollady tried the role of tourist during his one month stay, but he also tried to discover stories of local people. His approach is positive. He invites people to active participation. E.c. in case people bring to room their daily belongings and make the space habited. It is sequel of the project Abandoned Houses and he tried to fill in one empty place. “He wanted to meet real inhabitants of city centre. We found few restaurants, where he was only one English speaking visitor and it was pleasant experience for him,” said his guide Bára Hambálková of Foundation Prague Biennale. He also discovered that tourists are recommended to go only to three main locations by official tourist centers staff and those places are very crowded because of it.

The rising prices in the city centre caused that people are leaving it and majority are short-term rentals . One solution might be regulation of services like Airbnb. The rental flats owned by city are underestimated by officials. Lots of abandoned houses are owned because of speculations. The goal og project is to open this theme to public and discuss it freely. Expert critique was heard during discussion Monuments of integration in Centre of architecture and city planning.