The artist created paintings of demons representing neglected diseases for Doctors Without Borders (MSF) campaign of public enlightenment. The large-sized prints are situated on supporting wall at Letná tunnel. The curator is Zuzana Štefková of Artwall Gallery. The smaller-sized prints are installed in Kasárna Karlín. The exhibition Don't look! Kala Azar et al. is opened till October 7th 2018. 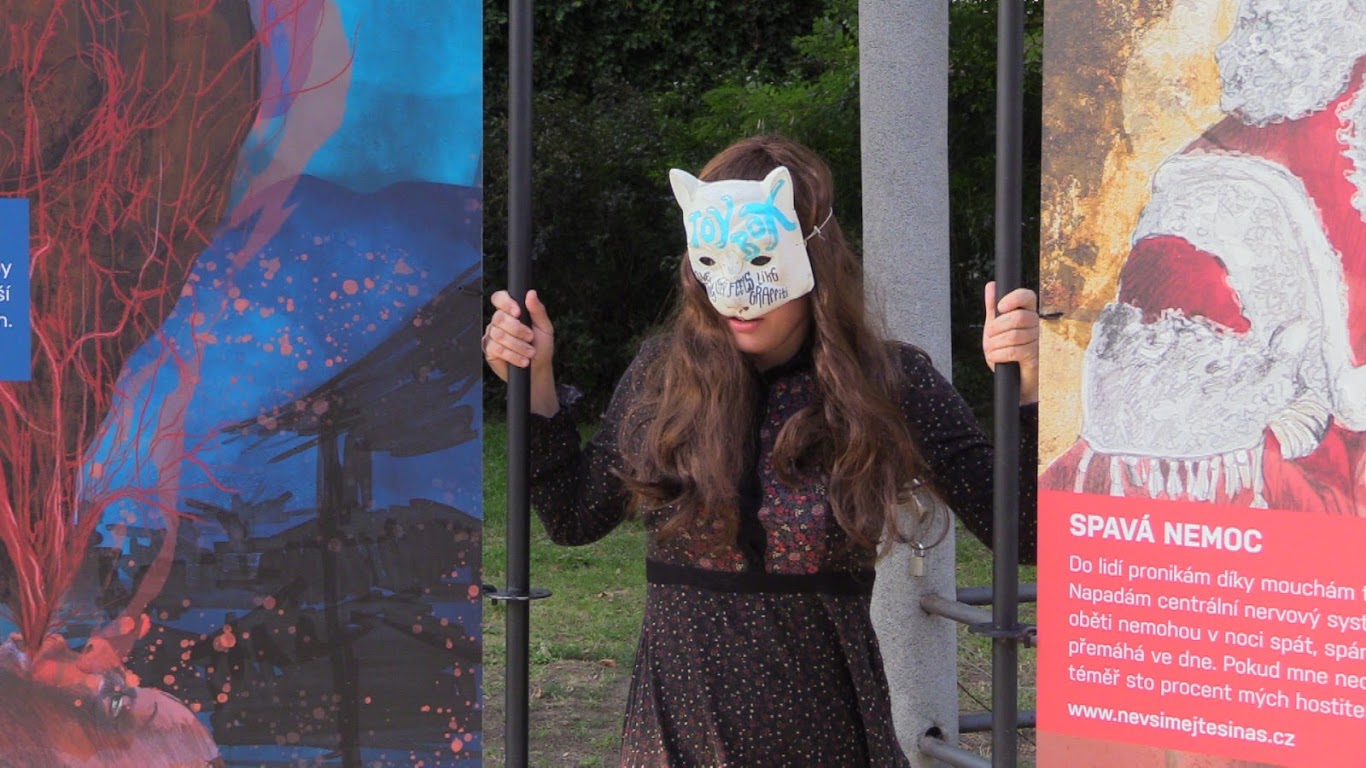 They are called diseases of poor people, because the development of their medicine is not lucrative for pharmaceutic concerns. Some medicines are several decades years old, others even do not exist.

There is the cycle of problems: ill children cannot go to school, adults cannot go to work and earn money. Their chance of cure is minimal then.

Five neglected diseases are pictured as demons. Every disease talks about oneself, praise being overlooked by people and therefore they can affect 0,5 billion of people. „They are connected by bad diagnostics, insufficient treatment and outdated medicines. In case of resistant form of tuberculosis, the patient is cured for 2 years, his chances are low and they suffer from serious side effects,“ said Pavel Gruber, director of czech branch Doctors Without Borders. 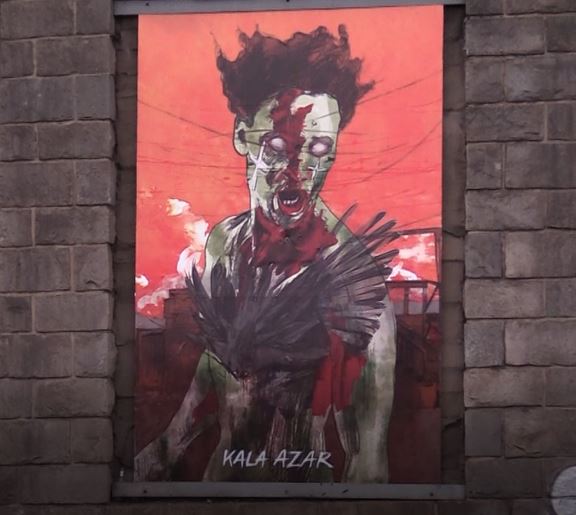 Toy_Box: The picture is inspired by my anxiety, when I imagined my close ones suffering this illness. It is affected of pop-culture, horror movies and characters of computer games. The comics and classical painting are united. It may featured even famous The Scream by Edvard Munch. The expressive scenery is screaming in fear.

Kala Azar, black fever (or visceral leishmaniasis by its formal name) is transmitted by insects. You can imagine this illness in reality like a 8-year girl, weighting only 12 kg and her liver is so swollen you can see them under her skin.

The disease is transmitted often between herdsmen and their animals. The parasite Leishmania is destructive for kidneys, liver, spleen and pancreas. It can be found in 70 countries, frequently in India, Bangladesh, Sudan and Etiopia. Symptoms are fever, weight-loss and it is difficult to diagnose. Two usual medicines are from 3o-s and 50-s and both have bad impact on patient, most often is deafness. Safe medicine Amfotericin B is almost not used, because its production cost is high and it have to be stored in cold, which makes transport even more expensive.

People can catch this disease repeatedly. Recommended advice for travelers is to camp at least 30 meters far from water, because sand flies are able to fly only 25 meters far. 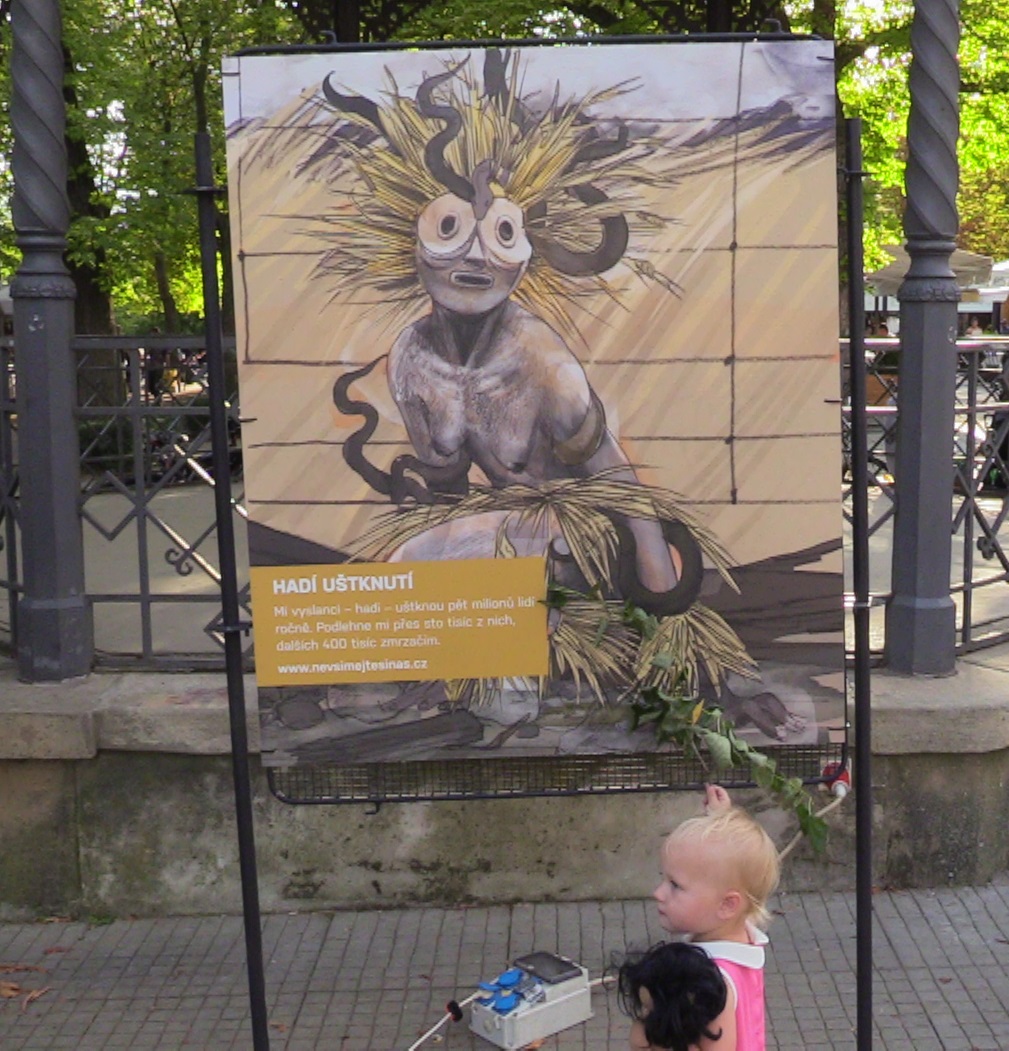 Toy_Box: I was inspired by authentic photo, where little girl stands in front of tuft of yellow grass, her mum was taking photo of her and there was big snake behind her at that moment. People in developing countries often use primitive means against snake bites, therefore little girl wears ritual mask.

Humanitarian medics often meet with snake bites, 100 thousand people die because of it every year in the world. More 500 thousand has permanent consequences, missing limb in most cases. Snake bite has been added to official list of neglected diseases by WHO this year.

There are several types of snake poisons, it is impossible to determine poison by doctor immediately. The universal serum (against ten snake poisons) was used until recent times. Its production cost is high and it was not lucrative, so its production was stopped in 2014. Nowadays are used two different medicines. Patient have to be observed and medicine is used after some time. The patient´s survival chance is lower and it is also burden for medical staff. The delay of needed help is about 10 hours. 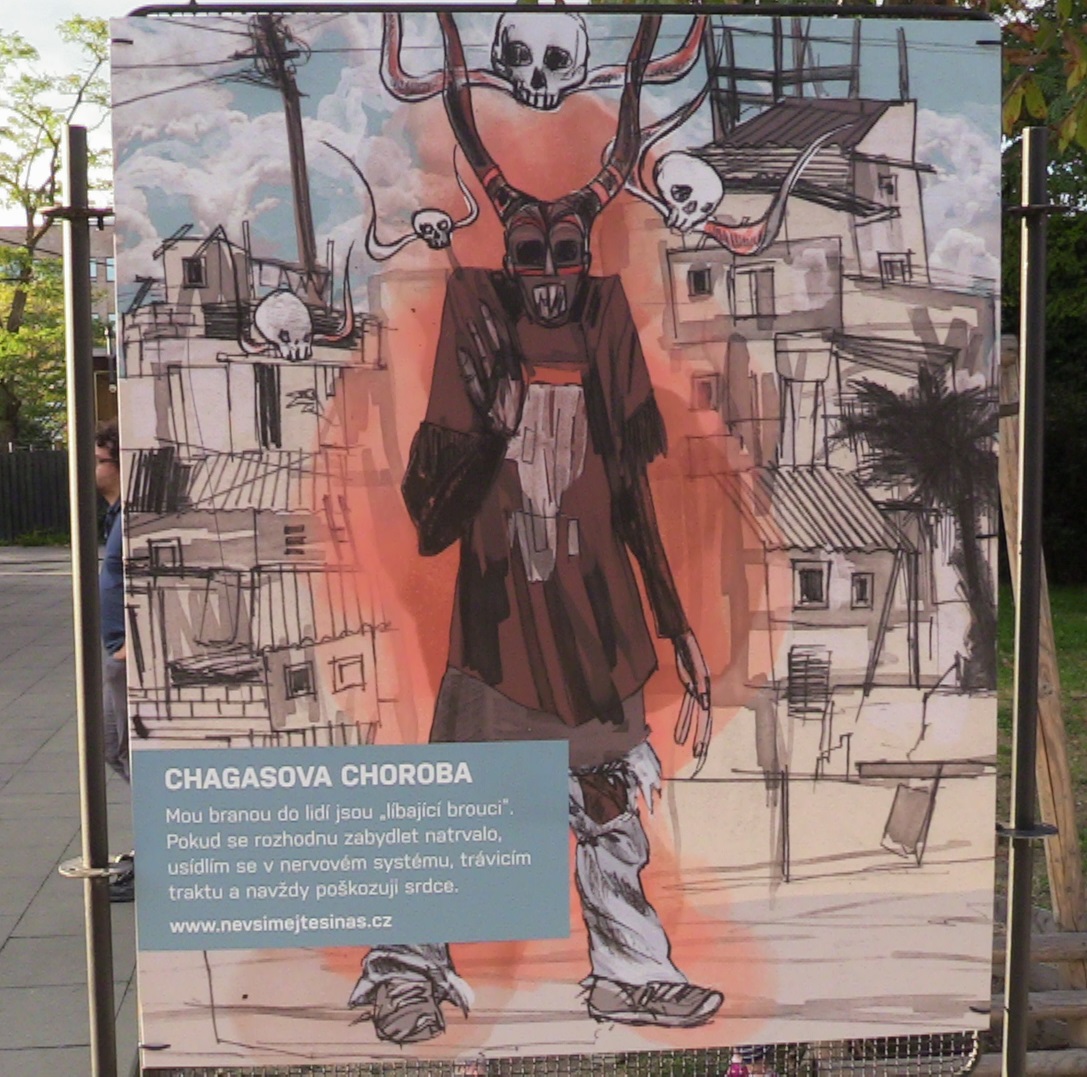 Tox_Box:  The illustration took place, where the disease is most often spread. The demon has got torned jeans like I used to wear.

Chagas disease is transmitted by „kissing bugs“. Doctor Without Borders started a project in Bolivia, people can report finding of transmitter via gratis SMS. The disinsection is performed by special team at that place. The disease is difficult to diagnose and curable only in the beginning stadium. There are 10 millions of ill people in Latin America, and about 12 thousand die yearly. Its symptom is painful swollen skin. 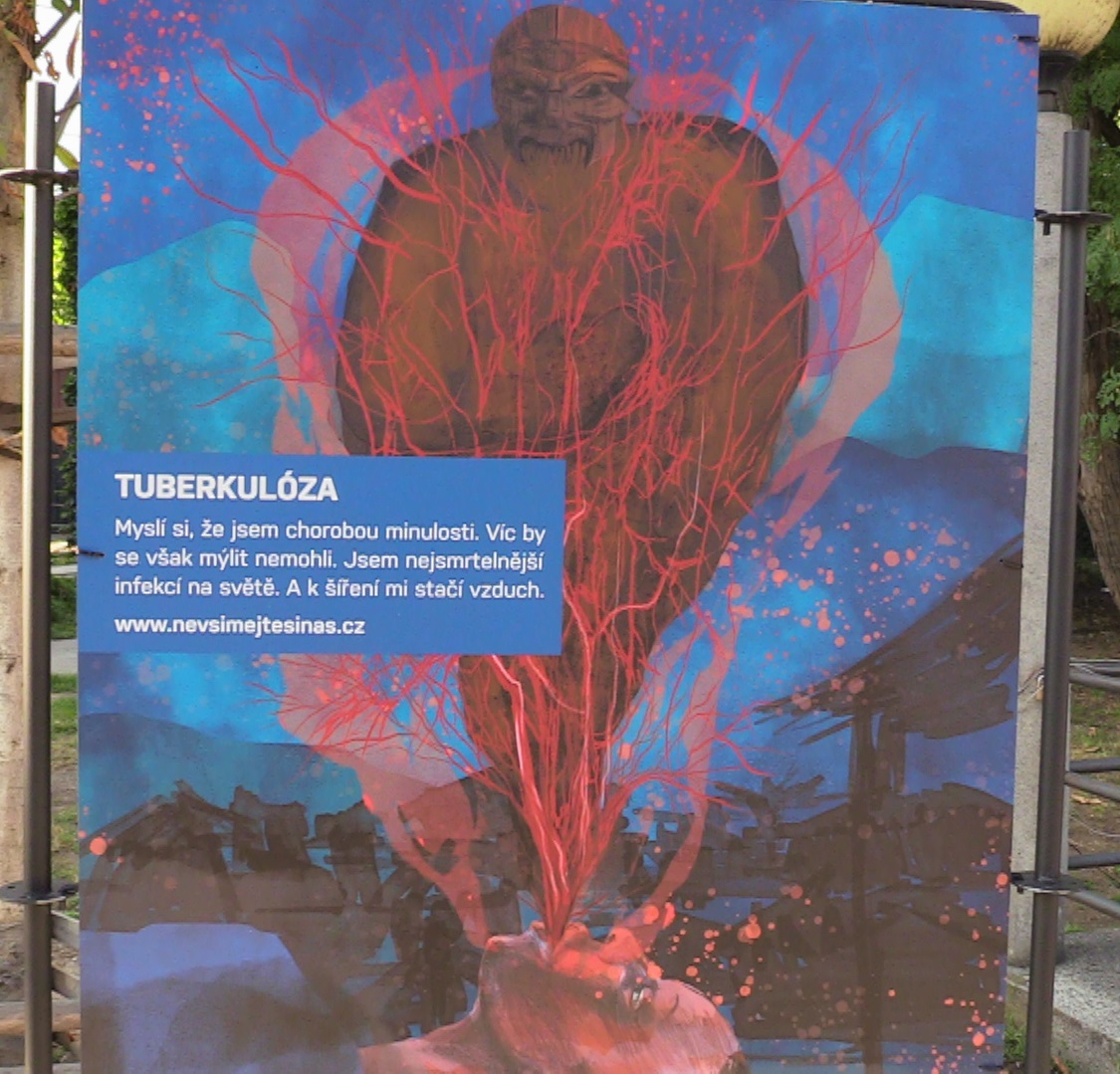 Toy_Box: I have tried to picture infection. I drew the bloodstream, which go out of mouth of ill person. It is situation of african night, where people do not know about terminal disease and they imagine it as demon. While you look at it, you should have a feeling of being infected. My apologies.

Tuberculosis has won teh position of the most mortal disease over AIDS. Tuberculosis in form of antimicrobial resistance is the biggest health risk of this century. The cure can take 2 years, patient have to undergo hundreds of injections and take thousands of pills.The chance of cure is not so good.

Two new medicines has been discovered, but most of people have no access to them, because they are not registered in the most affected countries.

Tuberculosis is transmitted via air and its mortality is close to ebola. 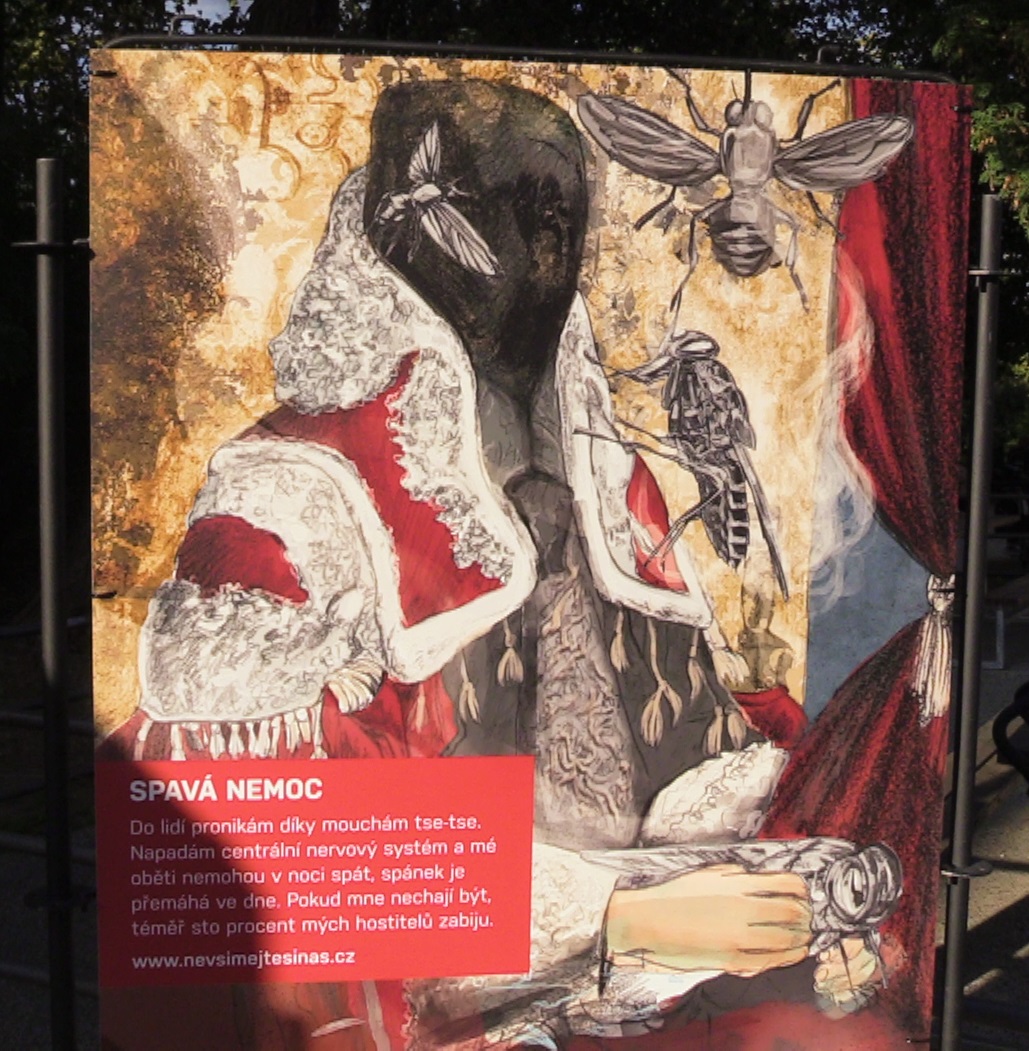 Toy_Box:  I was inspired my tsetse fly and faceless demon in the opium den. That is my imagination of sleeping sickness.

Sleeping sickness is infection transmitted by parasites. For its perfect diagnosis is necessary lumbar puncture. It is almost not used in praxis, the disease is difficult to cure in in later stadium. But the number of mortal cases was significantly lowered. Present hopes are put into killing the transmitter – tsetse fly.

Final positive message: As for the another neglected disease – ebola – the vaccine is in development.